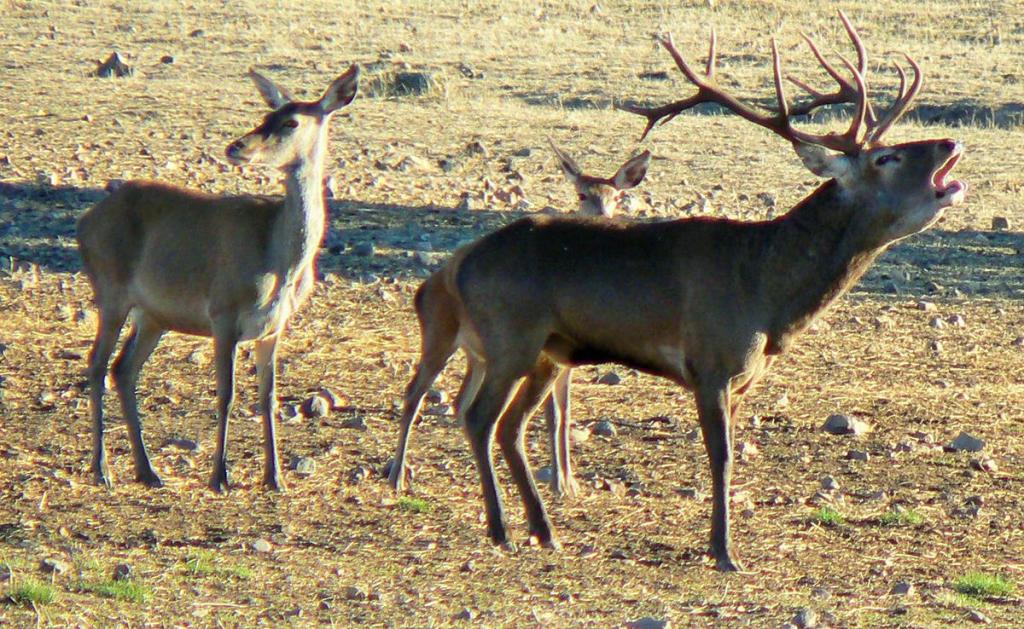 Live the Iberian red deer rutting season through the story of Elaphus, the big stag of "Discover the secrets of the red deer rut"

The sun is setting on a warm early autumn afternoon in the Serranía de Cuenca. Between the last days of September and the beginning of October, ochre and reddish colours start dressing the landscape. A couple of rainy weeks are behind us, and prairies and streams are alive again. The acrid aroma of damp fallen leaves subtly fills the air. As every day, Iberian red deer (Cervus elaphus) females leave their hiding places in the deep forest and occupy their preferred feeding areas in the large valley, where rich and nutritious green shoots are already available. 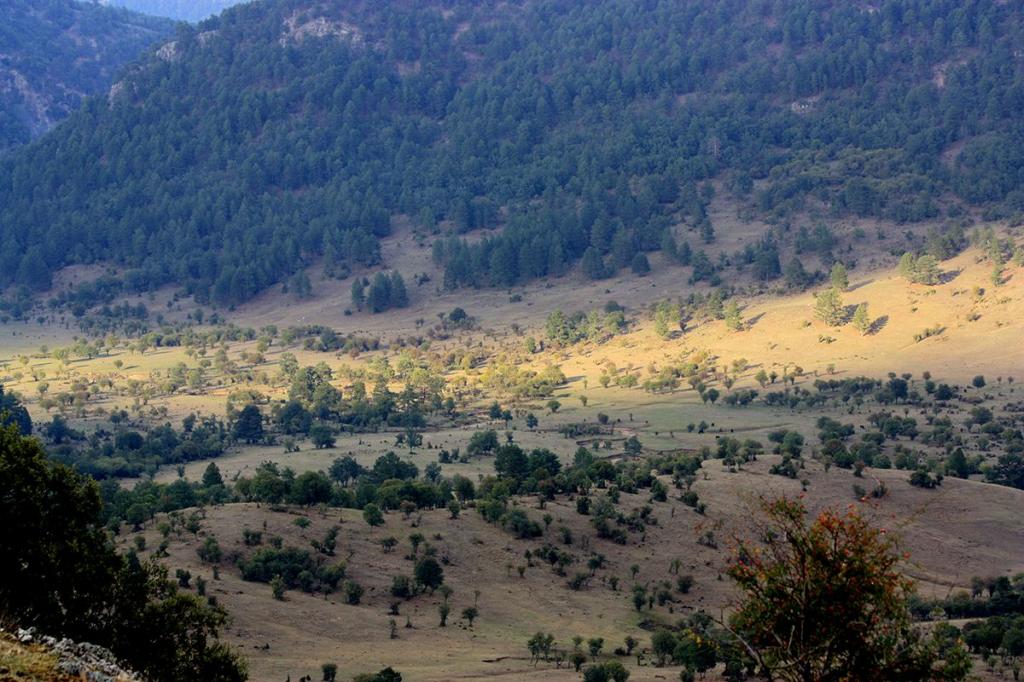 The enchanted valley of "Discover de secrets of the red deer rut" in the Serranía de Cuenca (Spain).

The sun goes down over the horizon, and unrest unexpectedly replaces the prevailing peace in the forest. The sounds of snapping branches and crushed shrubs advance from the deepest to the valley, and suddenly, a potent bellow arises from the hollow that provides access to the valley. It is such a powerful that crosses the surrounding mountains. Elaphus, a big Iberian red deer male, feels the beginning of the reproductive season, the need to perpetuate the species. The red deer rut starts in the Serranía de Cuenca. 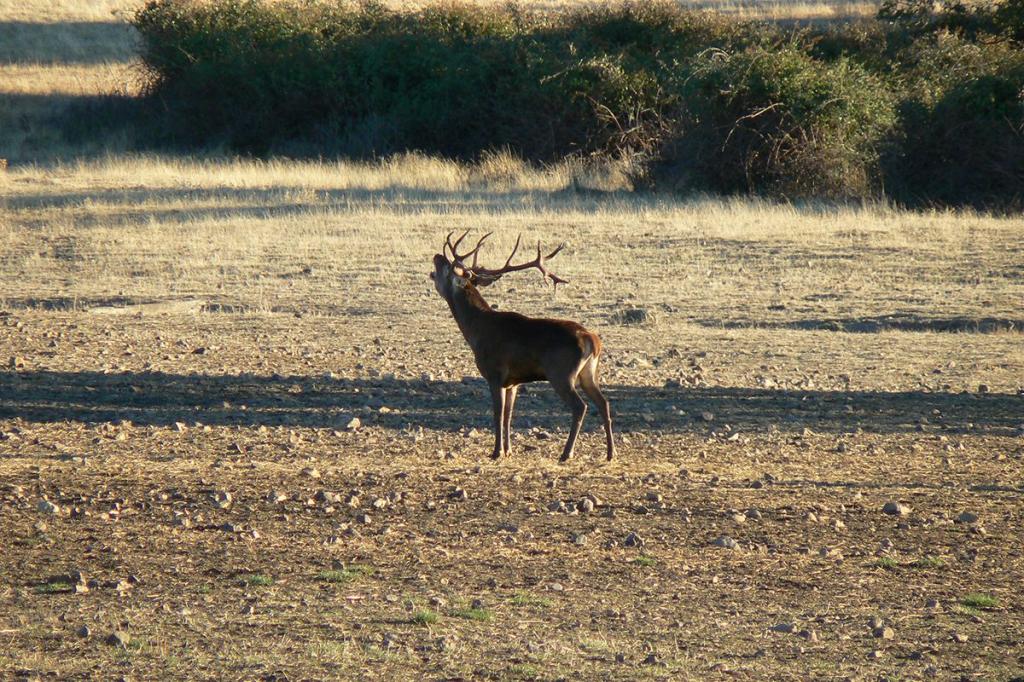 Elaphus, a big Iberian red deer male get into the valley.

Extremely excited, Elaphus emits his potent bellows continuously while approaching the groups of females. He pursues them tirelessly, trying to control them exclusively. His whiny bellows, musky perfume, and enormous antlers are the weapons of seduction. His majestic elegance shows that he is one of the lords of the forest.

Elaphus urinates on the sandy soil and lays down, becoming impregnated with sexual hormones, his perfume, that will motivate the receptiveness of females.

He needs to reproduce with as many females as he can. The perpetuation of the species through his valuable genes depend on it. But it will not be easy. With his bellows, Elaphus started the red deer rutting season, and many other Iberian red deer males will be bellowing and looking for females during the next 3 weeks. It is a tough competition. He knows that females prefer males that produce more frequent and intense bellows, and that other males avoid fighting against those bellowing like that. He also knows that powerful antlers play a key role to attract and retain females and to avoid other males. 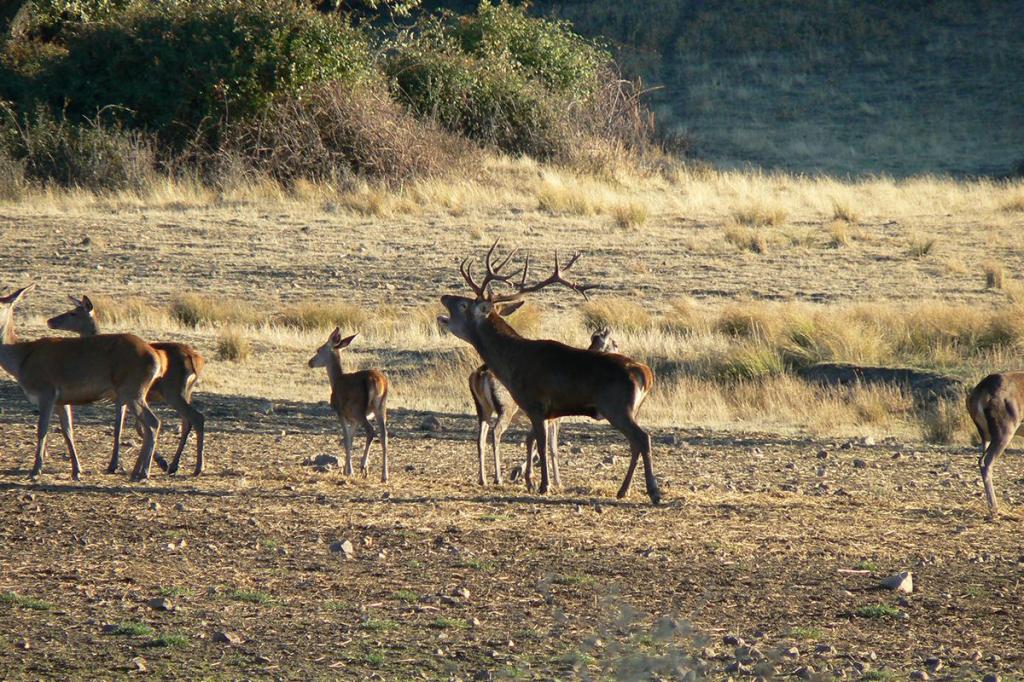 Elaphus pursues a group of females to seduce them.

Like Elaphus, many Iberian red deer males come to the big valley and try to acquire a privileged position among the lords of the forest. They have spent the entire year foraging in the deepest of forests and ravines, with the main goal to produce large antlers, since these bone structures, which are annually renewed, are essential for reproduction. Only the males with the biggest antlers will be able to reproduce with many females, and the rutting season is the moment of truth… Elaphus controls almost the whole valley, and will adamantly defend his right to reproduce with the females here. Some juvenile males courageously approach the groups of females under the watchful eye of Elaphus, but a mere show of his force and large antlers is enough to expel the young aspirants. Some old males, who were lucky and dodged the bullets of hunters, come the big valley as well, tired now after many past rutting seasons. Their time for reproduction is over, as they have no chance to win the battle for reproduction against younger, stronger males. 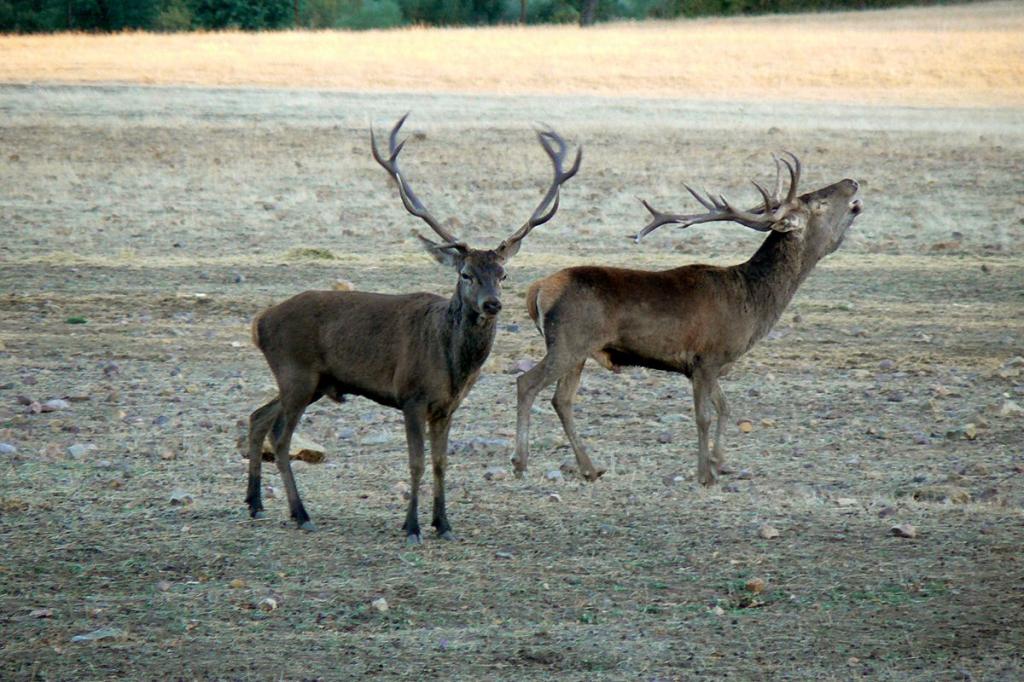 Two Iberian red deer males bellow to show females who is the best for reproduction.

The rutting season is going well for Elaphus. He feels strong despite not having fed for several days, as his mind is set on reproduction only. He has never stopped seducing groups of females, and his genetic legacy is ensured in the Serranía de Cuenca. One more night falls in the forest and the shadow of a stranger appears in the big valley. It is another huge Iberian red deer male announcing his entrance into the valley with powerful bellows, attracted by the scent of females. Both big males judge each other’s strength from distance. In the blink of an eye, they have established that they must fight to win the right for reproduction with the females in the valley. 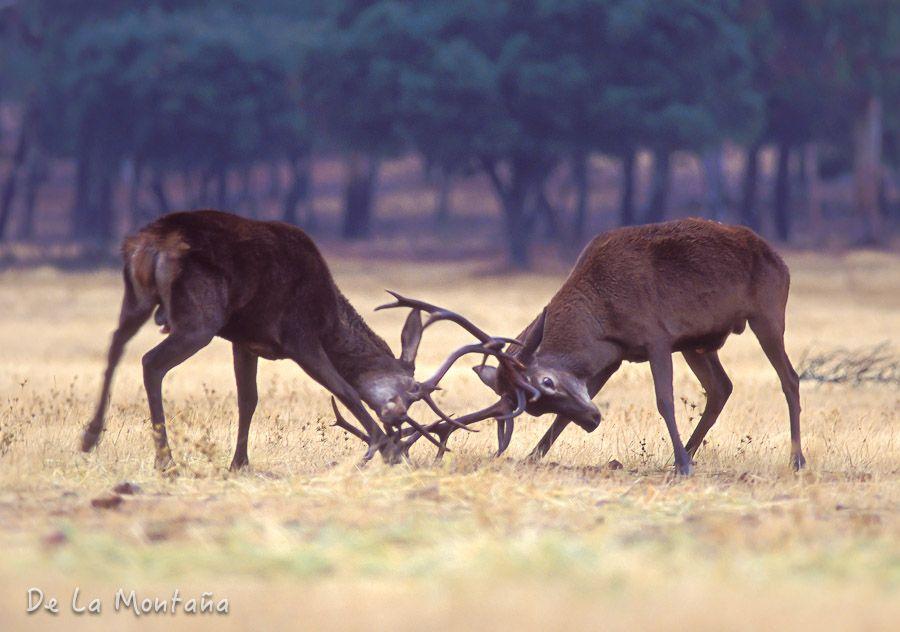 Two big males have established that bellowing is not enough, and they must fight to win the right for reproduction.

Both males clash their antlers and push hard. After several minutes of fighting, they slow down a bit, but charge again after a few seconds. They are exhausted, but need to follow their instincts. The new, younger male in the valley shows pride and fitness, whereas Elaphus feels the weight of many days being the king of the big valley. A strong hit causes Elaphus to fall, leaving the fight. The immediate pursuit by the aspirant forces Elaphus to retreat into the forest. One of the lords of the forest, Elaphus, has been pushed off of his throne in a mythic rutting season fight in the big valley. 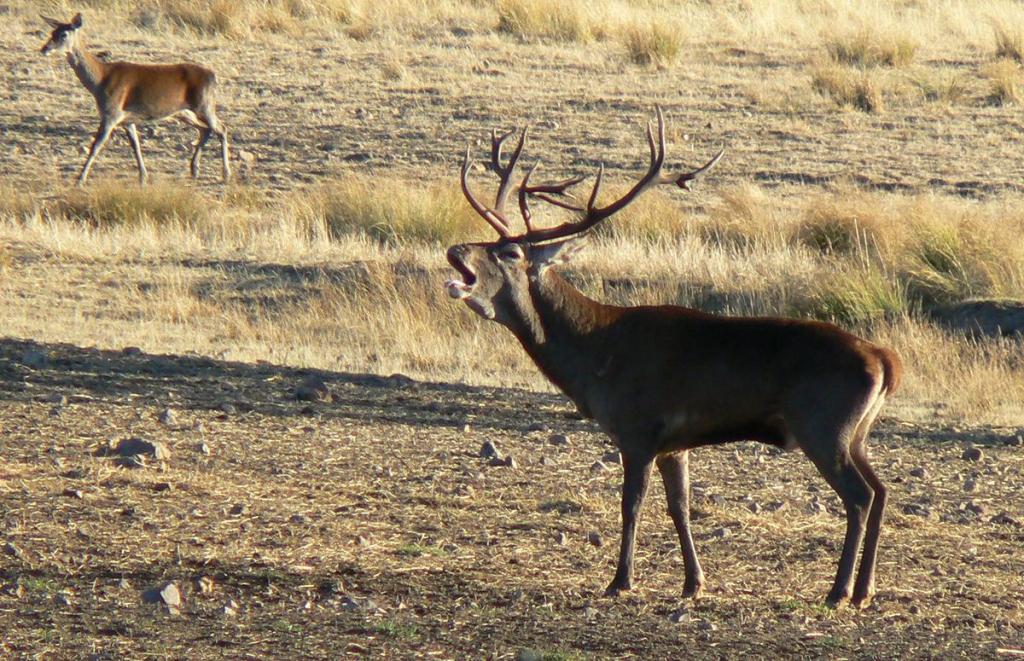 The winner celebrates his victory with a potent bellow.

In his 6th year, Elaphus has been dethroned. It feels like yesterday, when he was a fawn spending most of the time leaped into the brush, at a few meters from his mother’s protection. It seems incredible that, just 4 years ago, Elaphus was one youngster among many with very few options to win fights during the rutting season. Now he has suffered his first defeat, but he is still one of the lords of the forest. 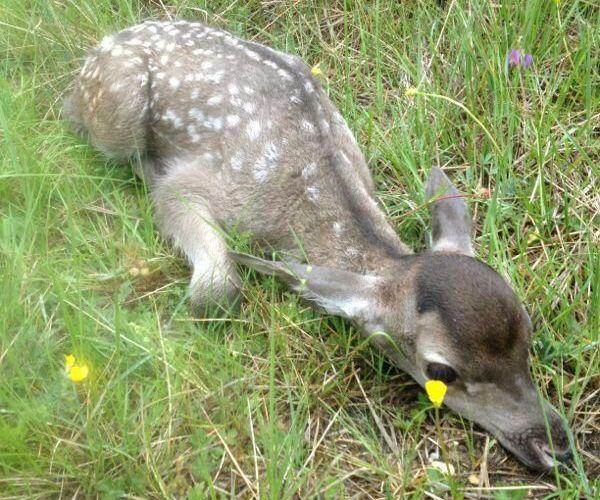 Six years ago, Elaphus was a fawn spending most of the time leaped into the brush, at a few meters from his mother’s protection.

Very exhausted, Elaphus has lost almost a third of his weight during the rut. He will now get back to normal life in the deep forests of the Serranía de Cuenca, maybe accompanied by one or two young males who try to learn valuable lessons from an experienced big male like him. He will spend the entire year looking for good feeding grounds in order to develop again large antlers that will enable him to strut, for one more year, among the lords of the forest during the breading season. Peace returns to the Serranía de Cuenca. The instincts become numb again. The forest rests in silence.

Peace returns to the Serranía de Cuenca, and the forest rests in silence again.

Stories as this one occurs every day during the Iberian red deer rutting season in the Serranía de Cuenca, and we are witnesses in our activity of Nature interpretation and Science communication "Discover the secrets of the red deer rut", which we offer hand-in-hand with Ecoturismo Cuenca. Are you going to miss it?

Feel free to contact Ecotourismo Cuenca for further information and make your reservation to enjoy with us the Iberian red deer and fallow deer (Dama dama) rutting seasons in a privileged spot in the heart of the Natural Park of the Serranía de Cuenca.

See you in our enchanted valley!

Are you interested in Environmental Sciences, Nature interpretation and Science communication?