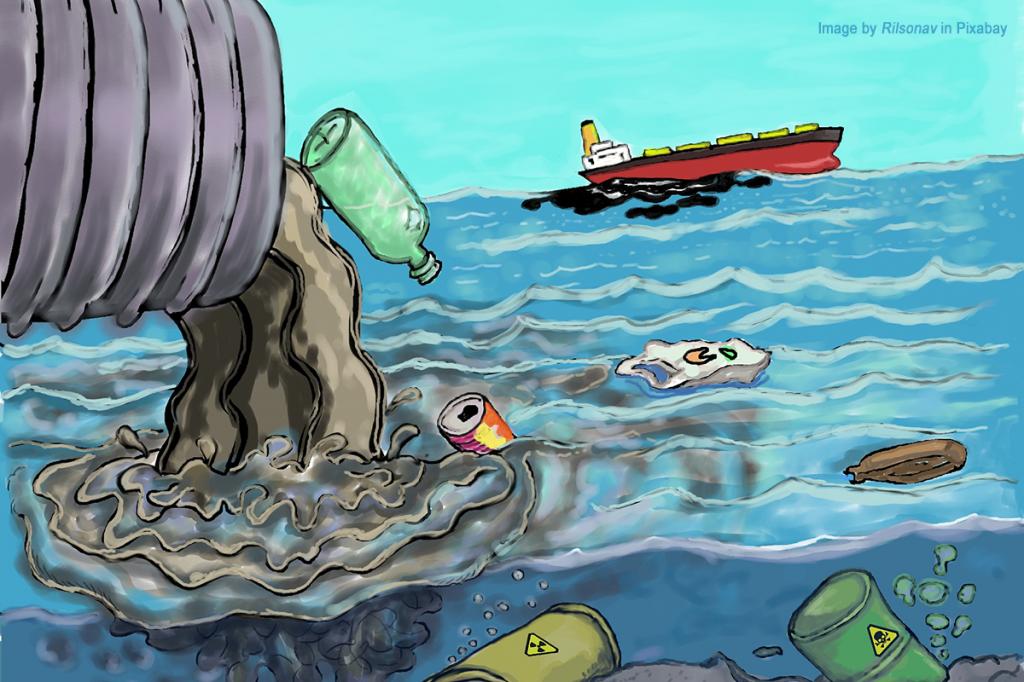 It is sometimes self-evident whether a place in our environment is clean or is affected by a problem of environmental pollution, that is, whether there is some type of “agent” that alters its purity or normal conditions so that it may be detrimental for living beings. For instance, if we walk alongside a river and observe foam or rubbish floating in the water, or the water has an oily or turbid appearance, or it gives off an unpleasant smell, we will immediately identify that the river (or the stretch where we have made these observations) is polluted, and we would never dream of bathing in or drinking that water. However, some of the most severe, harmful and worrying problems of pollution are not perceived by our senses, and it is perhaps because of this that we have, for far too long, not paid sufficient attention to their causes and consequences. We are referring to most cases of chemical pollution. 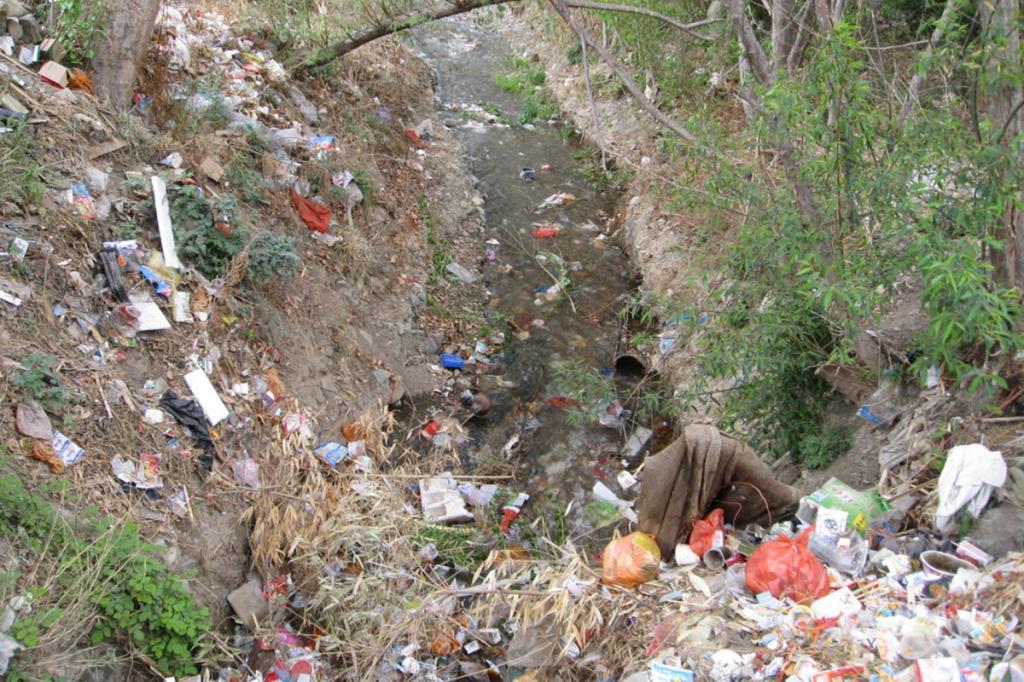 It is sometimes easy to identify at first glance whether a place in our environment is affected by a problem of environmental pollution (Photo: Global Water Forum / CC BY 2.0).

The problems of chemical contamination occur when we introduce potentially toxic chemicals into the environment –do not forget that solely the dose determines whether or not a thing is a poison–. Some of these substances are of a synthetic origin and should never have become part of nature. This is the case of: most of the multiple persistent organic pollutants (POPs), which are generated as by-products of industrial processes and combustion or through their direct industrial use; of the tens of thousands of pesticides and biocides that we actively spread over our fields and throughout cities to control or eradicate other life forms that bother us; of the chemical products used to make the increasingly ubiquitous microplastics; of the pharmacological products for animal and human use, or the fertilizers that end up reaching the aquifers and the watercourses because of their direct use on our agricultural land. Chemicals that are a natural part of the earth's crust and biogeochemical cycles, such as heavy metals and many other elements, can also generate pollution-related problems when released into the environment in amounts that exceed basal (and generally harmless) levels for a certain environment. Although the origins of chemical pollution may also be natural –for example, volcanoes or forest fires produce gases, particles and chemical elements, sometimes in large quantities– the main problems of chemical pollution that devastate our environment are caused by humans. 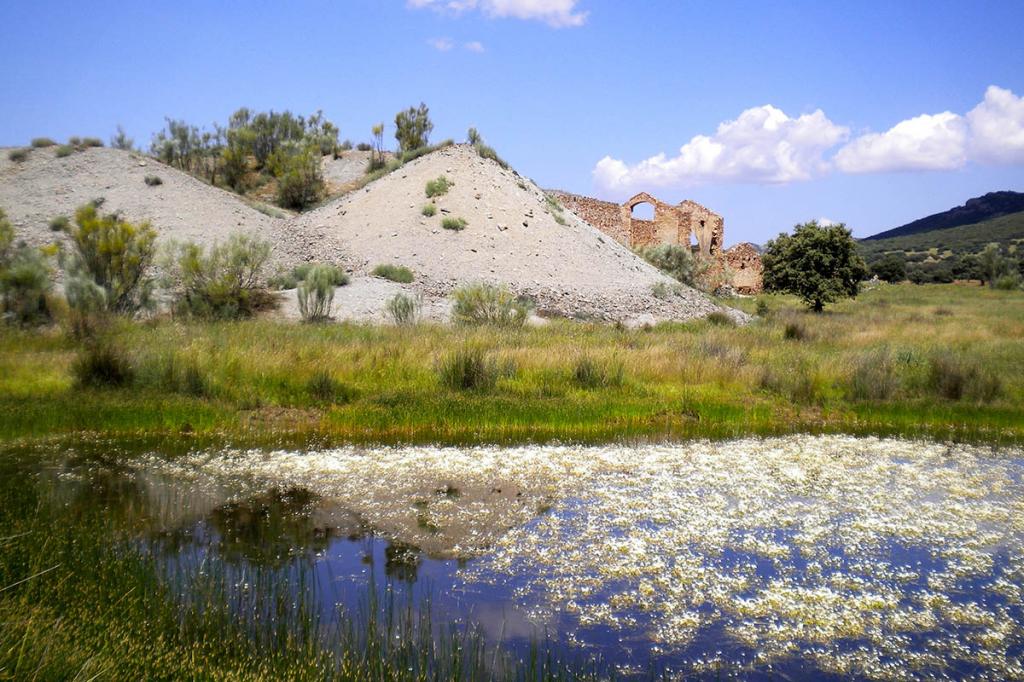 It may not be easy to associate this pretty picture with a pollution problem. But mining residues are a major source of heavy metal pollution, and if not restored or remediated, they can contaminate the environment for decades or centuries, even after the termination of mining activities.

Of the different forms of pollution, chemical pollution is one of the most annoying for several reasons. As mentioned above, the substances involved have a high toxic potential, that is, they have the capacity to negatively affect the health of living beings when we are exposed to them through the air we breathe or the consumption of water or food, or even through contact with our skin. Moreover, these substances do not usually occur alone: in most cases, chemical pollution is owing to a mixture of substances whose adverse effects as a whole are added or enhanced. 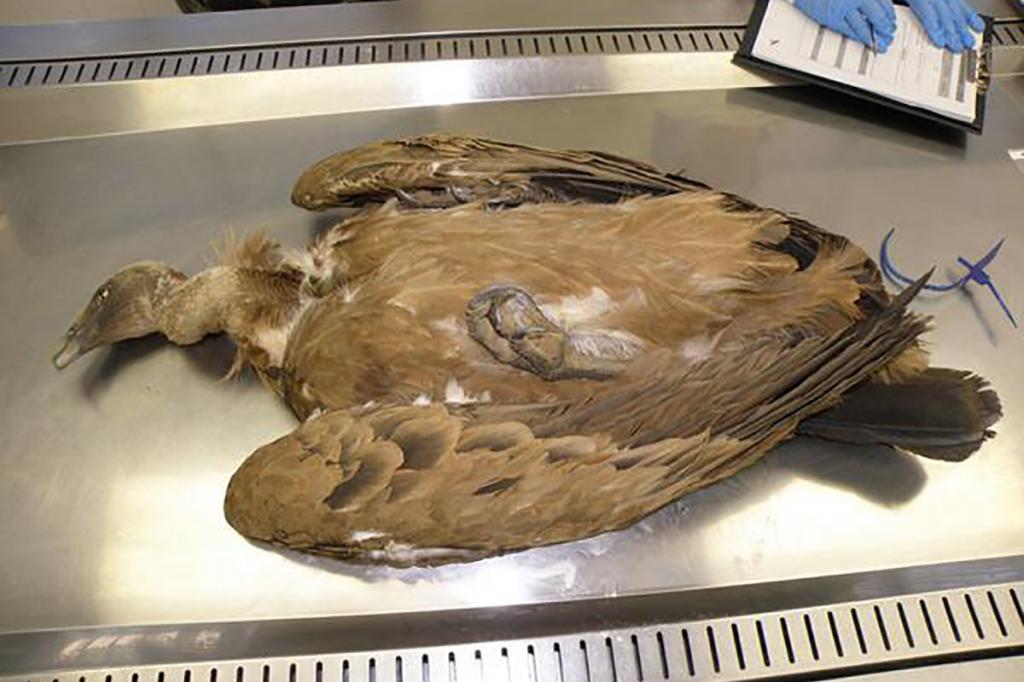 Griffon vulture (Gyps fulvus) killed as the result of intoxication after ingesting a pharmaceutical product for veterinary use through the consumption of the carcass of a medicated domestic animal (Photo: Mark Taggart).

Many of the substances that cause chemical pollution are also characterized by their persistence and potential to bioaccumulate. This means that once they are introduced into the environment they will be there for a long time, even if we stop producing them, and that they will accumulate in the tissues of living beings over time, which causes a phenomenon of biomagnification through the trophic chain, at the end of which are we humans. Furthermore, many toxic substances do not understand frontiers, so they can travel long distances and spread widely, thus becoming a planetary problem. A good example of all this is that of POPs and mercury. Both pollutants are released into the atmosphere, mainly from industrial areas in Europe and North America, but we find them at high concentrations in remote areas of the planet such as the circumpolar regions. Once there, they accumulate in marine fauna (the mercury in form of the toxic methylmercury) at levels high enough to jeopardize the conservation of those fauna and the health of the indigenous peoples that feed on them. Some POPs that were last released more than 70 years ago are still found at high concentrations in the Arctic today, giving us an idea of ​​their high persistence. Another striking example is related to the herbicides used by the US Army to spray about 20 % of the forests in Vietnam during the war between both countries. More than 40 years after the conflict, it is estimated that more than 3 million Vietnamese still suffer from the toxic effects of these chemicals owing to their presence in rivers and soils and their accumulation in the food chain. 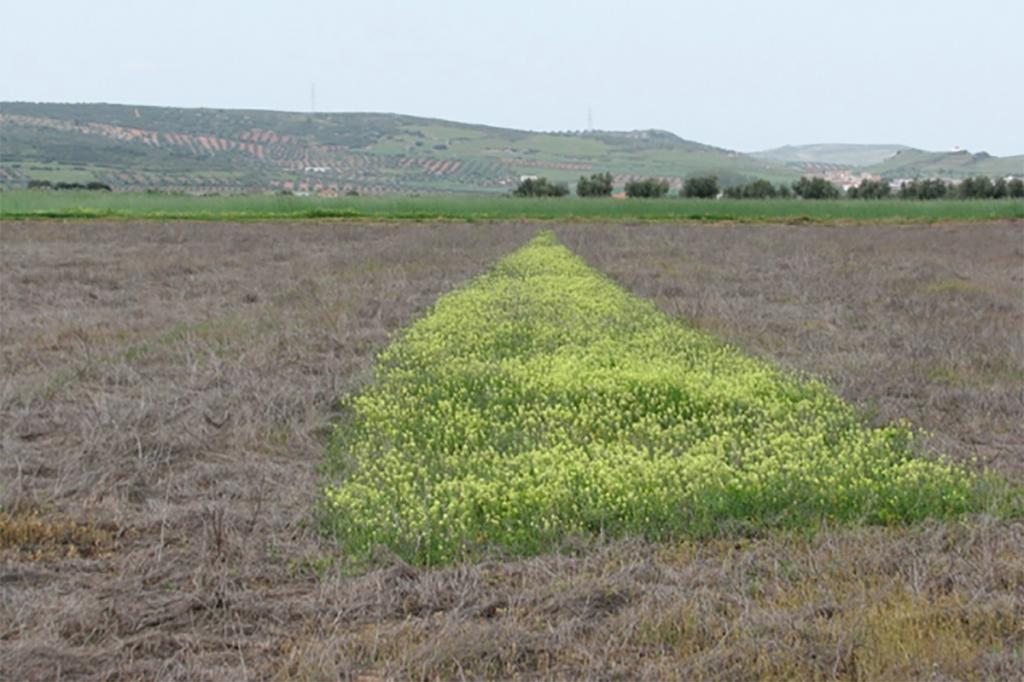 An ounce of grass saved from herbicides application in this field. These chemicals can be toxic for many wildlife species, and affect their habitat use and the availability of resources, which is particularly negative for the conservation of wildlife species linked to agricultural ecosystems (Photo: Rafael Mateo).

The vast majority of the chemicals created and produced for various purposes do not understand that they only have to fulfill the objective for which they were designed. The previous example of the herbicides used during the Vietnam War is illustrative in this respect, since herbicides were designed to kill plants, but this does not imply that they cannot also be highly toxic for other forms of life. Another good example involves rodenticides. Although these pesticides are used to kill the rodents that bother us in our towns and cities, or those that can cause damage to our crops, they are highly toxic for a multitude of predators ("non-target species") that are exposed to these chemicals when they feed on intoxicated rodents, such as raptors or mammalian carnivores. Although the use of rodenticides is associated with anthropized zones and agriculture, traces of these substances have even been found in wild animals from natural areas considered free of environmental contamination. 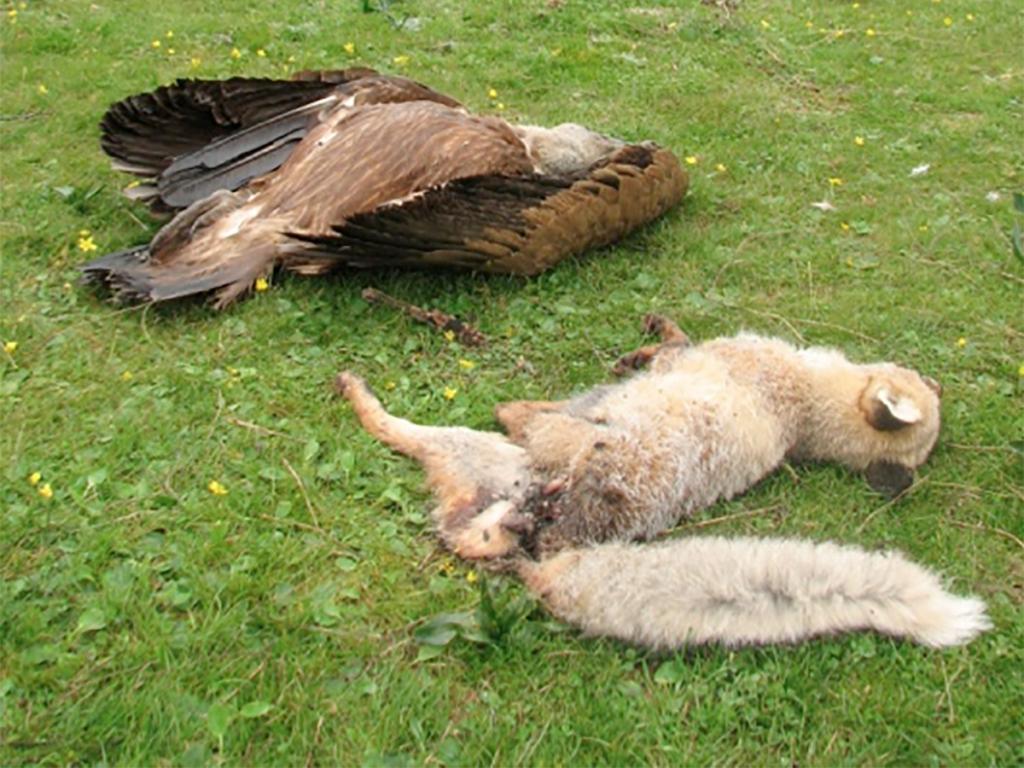 A fox (Vulpes vulpes) dies intoxicated after ingesting a highly toxic rodenticide product, and the griffon vulture that feeds on its carcass ends up sharing the same fate. This is the kind of situation that we can generate when introducing pesticide products into the environment, in this case because of illegal practices such as the use of poisoned baits for predator control (Photo: Rafael Mateo).

Finally, one of the great disadvantages of chemical pollution is that it usually goes unnoticed. With the exception of the striking fatal events with obvious consequences, chemical pollution is invisible, and its effects on the health of living beings are manifested in silence, without attracting attention, until in some cases, unfortunately, it is too late. The air we breathe, the water we drink or the food we eat may contain a multitude of potentially toxic chemicals if they come from contaminated areas or if they have been treated improperly with chemicals, and despite this, they may appear to be normal and we would never imagine that they might be contaminated. A population of bees, otters or vultures may be in decline even though their habitat does not have any apparent degradation and provides them with the necessary resources for their survival. But exposure to pesticides, organic pollutants or drugs may be behind such declines. 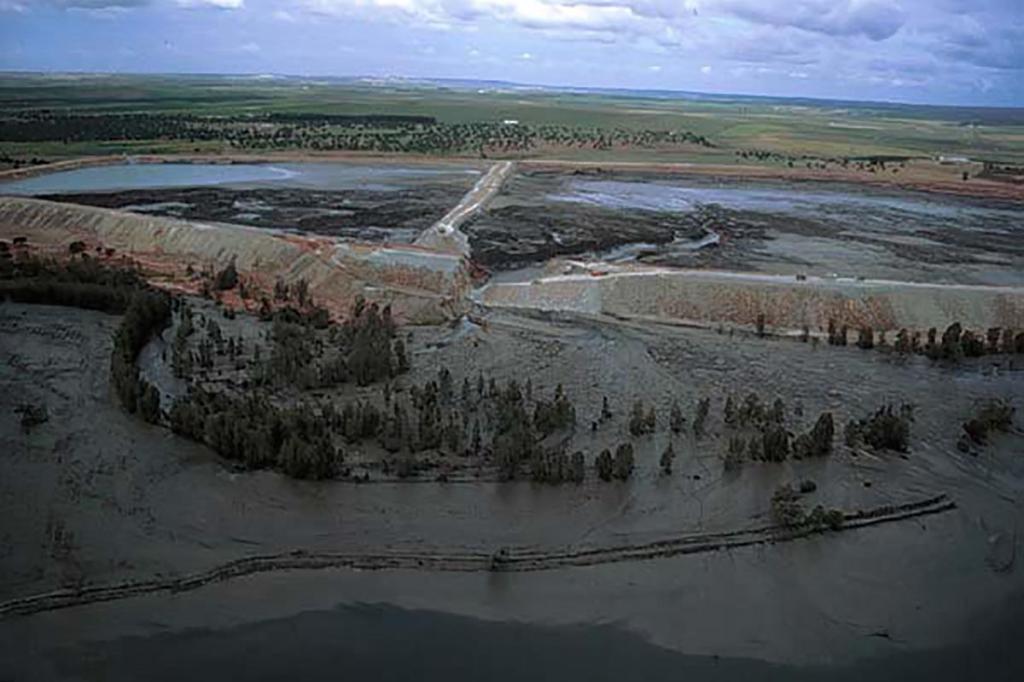 The Aznalcóllar spill, which occurred in 1998 owing to the rupture of a mining pond containing tons of toxic sewage sludge, is one of the most serious environmental disasters in the history of Spain (Photo: Universidad de Granada).

The invisibility of the threat posed by chemical pollution is also sometimes associated with our failure to see or our lack of responsibility and environmental awareness. If we live in a city covered by a kind of gray fog that contrasts with the blue of the sky, it will not take us much mental effort to conclude that the air of that city is dirty, and that the dirt is owing to the presence of particles and a multitude of toxic substances derived from traffic emissions or from surrounding industrial activities. However, many citizens will continue overusing their cars, and our competent authorities will continue ignoring the urgent need to take this type of pollution very seriously. 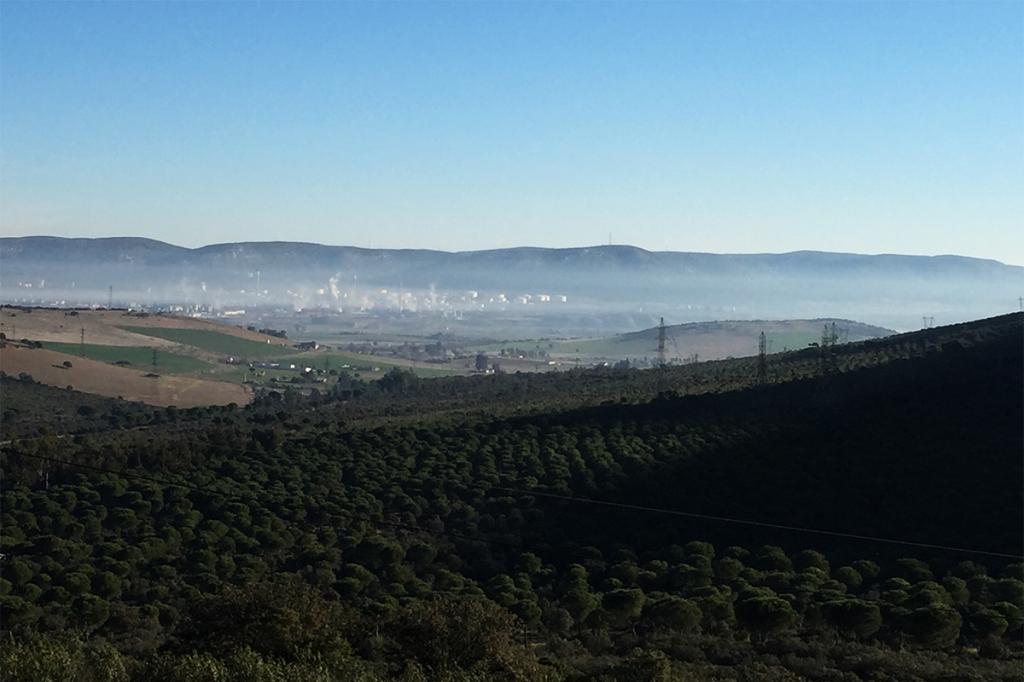 Air pollution is not exclusive to large cities. Puertollano, a city in Castilla-La Mancha (Spain) with around 50,000 inhabitants, receives pollutant emissions from a nearby petrochemical complex. Depending on wind and rains, these emissions are widely extended throughout the surrounding environment.

We must stop underestimating the consequences of chemical pollution. At present, air pollution causes more premature deaths than tobacco worldwide: almost 9 million a year! We also know that exposure to toxic substances of an anthropogenic origin is behind the decline of the populations of an increasing number of wildlife species, either as a primary or a secondary cause. Even our neighbours the sparrows (Passer domesticus) are declining as a consequence of chemical pollution, among other factors. The European Chemicals Agency (ECHA) has registered about 150,000 chemical substances for its use, and except for pharmacological products (whose use and commerce are subjected to very strict regulations and controls), we know the theoretical toxic potential and the environmental and health risks of only 20 % of them before they enter the market and begin to spread to nature. Since the global economy is experiencing a "chemical intensification" (a growing global production of new chemicals for use in an increasing number of applications), raising the awareness of the need to prevent chemical pollution, adopting effective regulations to reduce the emission of potentially toxic chemicals into the environment, and monitoring their levels, scope and effects in nature should be a priority. 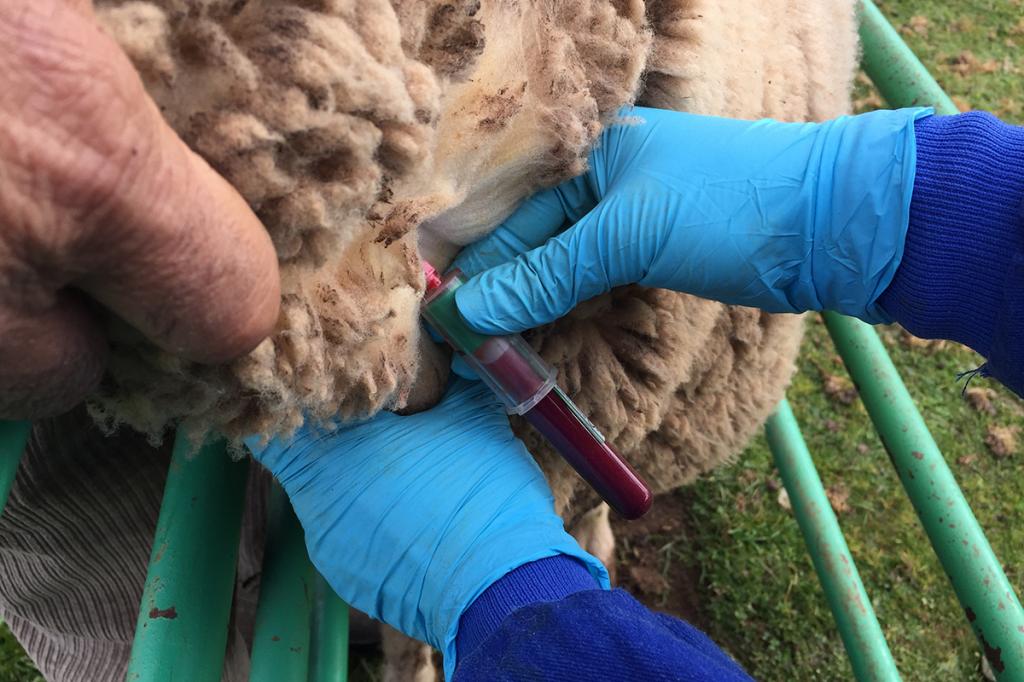 Studying the presence of chemicals in wildlife and livestock over time, as well as their toxic effects, is very useful to assess whether a particular habitat or ecosystem is threatened by chemical pollution.

Ecotoxicology is the science dedicated to studying the presence and adverse effects of chemicals in animal and plant populations, as well as the processes and factors determining their transport, transformation and breakdown in the environment, in order to evaluate the risk that they represent for life and the strategies required to minimize it. This is an inter- and multidisciplinary field of the Environmental Sciences that we at Azeral Environmental Sciences develop in close collaboration with some of the best laboratories in Geology, Chemistry, Physiology and Toxicology.